Doors of the churches of some of Davenport’s most historic congregations will be open to visitors, Sunday, May 19th for the Hilltop Campus Village Altar Crawl.  Six churches in and around the boundaries of The Village will welcome visitors for the free, first-time event.  Hours are 1-5PM. Participating churches include: Bethel A.M.E., First Baptist, First Christian, First Presbyterian, St. John’s United Methodist, and Trinity Episcopal.

May is designated as Preservation Month by the National Trust for Historic Preservation.  All of these churches are home to some of Davenport’s earliest communities of faith, tracing their roots to the city’s beginnings. Their first meetings were in homes and buildings located in early Davenport.  As the city grew, the congregations moved to the hills above downtown.  Most of the structures, built between 1867 and 1964, were designed by master architects from Davenport, Chicago and New York.  Five of the six are individually listed on the National Register of Historic Places.

Not content to rest on their historic foundations, these congregations continue to give back by hosting many social programs benefitting people living in Davenport. “Churches have always been secure cornerstones of villages, and we are privileged to be home to some of the most historic, architecturally significant and deeply-rooted places of worship in the Quad Cities. We think people will find this unique and attractive feature of the area very interesting,” said Scott Tunnicliff, Director of Hilltop Campus Village.

The May 19th open house will allow the churches to showcase the architecture of their buildings, history of the churches and their congregations, as well as current community programs and services.  Visitors may begin their tour at any participating church where guides will be on hand to welcome guests and direct them to points of interest.

A tour brochure with map and more information will be available at all locations or can be downloaded at the Hilltop Campus Village website beginning May 1st.

Participating Churches &History of their Congregations: 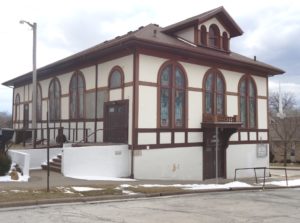 Bethel A.M.E. Church, 323 W. 11th St.*-  Bethel A.M.E. traces its roots to its founding in 1866 when four men came together to organize the African Methodist Episcopal Church of Davenport. It was the first African American congregation in Davenport and among the earliest in the state of Iowa.  The stucco and half timbered building, designed by the noted Davenport architectural firm of Clausen and Clausen, has been in service since 1908. The interior features a barrel vaulting over the nave and a domed apse behind the altar; the stained glass windows were donated by members of the congregation.

First Baptist Church, 1401 Perry St.*-   The cornerstone of the present church building was laid in 1889 during the 50th anniversary of the founding of the congregation. Then called “Calvary Baptist,” the sanctuary was designed in the Romanesque Revival style by John S. Wollacott of Chicago. Wells Glass Company of Chicago created the stained glass windows. Davenport’s Baptists held their first service on September 13, 1839. The congregation’s first church was built at the corner of 4th and Brady on land donated by Antoine LeClaire, making the congregation the oldest continuously meeting Protestant congregation in Davenport. During the tour there will be historical items on display and refreshments available in Fellowship Hall.

First Christian Church, 510 E. 15th St. – With its current building constructed in 1964, this congregation will celebrate its 175th year in Davenport in 2014. Davenport’s First Christian Church began in a house at 3rd and Main on July 28, 1839, with 21 charter members. The first church home was in the Tapley carpenter shop at 2nd and Brady. As the congregation grew, it moved to different locations, building two churches in the process. First Christian is affiliated with the Christian Church, also known as the Disciples of Christ. The Christian Church is a denomination that grew out of the Scottish Presbyterian Church and is recognized as having its roots in the United States. The tour will feature music, visits to the sanctuary, prayer chapel, fellowship hall and gymnasium as well as an historical display and refreshments. 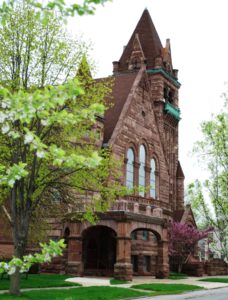 First Presbyterian Church,* 1702 Iowa St.-  Built 1897-98 in the classic Romanesque style, First Presbyterian’s sanctuary was designed by the Galesburg architectural firm of Gottschalk & Beadle who designed a nearly identical church on Galesburg Square that was completed one year prior. Its stained glass windows are by J and R Lamb Studios of New York City. The founding congregation met in April, 1838, in a small building on Ripley Street with 10 members. During the past 175 years, the congregation has worshiped at five different locations and built three churches. Altar crawl visitors are invited to tour the sanctuary, balcony, chapel and elaborately decorated original pastor’s study, as well as enjoy an organ demonstration and refreshments in the Fellowship Hall.

St. John’s United Methodist Church, 109 E. 14th St.*- The cornerstone for today’s church was laid in 1902, and services began there in 1903. It was designed by Parke T. Burrows with F. G. Clausen serving as the supervising engineer. Davenport Methodists trace their beginnings to a small congregation in Rockingham, a settlement located on Davenport’s southwest side. The first services in Davenport began in 1837, and the first Methodist church was erected in 1843. During the 19th Century, several Methodist congregations formed and additional buildings erected. Two churches came together to form the congregation that dedicated St. John’s in 1903. Highlights of the May 19th tour include the sanctuary, a conference/history room, the downstairs of the former parsonage, plus refreshments at The Center, located across 14th Street and home to the popular “Skate Church” and many other community activities. 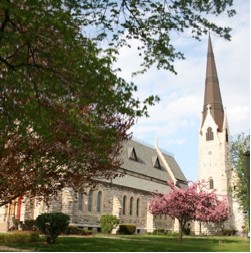 Trinity Episcopal Cathedral, 121 W. 12th St.*- Built 1867-1873, this Gothic-style church is the oldest on the tour and was consecrated as Grace Cathedral. It was the first cathedral of the Episcopal Diocese of Iowa. It was designed by Edward Tuckerman Potter of New York City, one of the leading church architects of his time. The first Episcopal parish was established in 1841.  Its first church was a small frame building erected at Fourth and Main Streets, with a crude altar, plank benches and a round stove in the nave; a second church, destroyed by fire in 1873, featured the first pipe organ in Iowa. Congregations from the old Trinity Episcopal Parish and Grace Cathedral merged in 1910 to form Trinity Cathedral. Visitors will tour the sanctuary and rarely opened original sacristy.

* Individually listed on the National Register of Historic Places

Hilltop Campus Village:  An Iowa Main Street Community located in Davenport, Iowa. Its goals include creation of a revitalized, mixed-use neighborhood that is family friendly, clean and safe, alive with activities and excitement, and retention of a diverse population living and working in the established district.

P.U.N.C.H. (People Uniting Neighbors and Churches): Formed in 2004 by the churches in the Brady Hill neighborhood of Davenport, its goal is to make the neighborhood a better place to work, worship and live in.

This entry was posted in Uncategorized. Bookmark the permalink.